Disclosure: Joyfully Domestic may earn a commission for purchases made after clicking links on this page. View our disclosure policy for details. 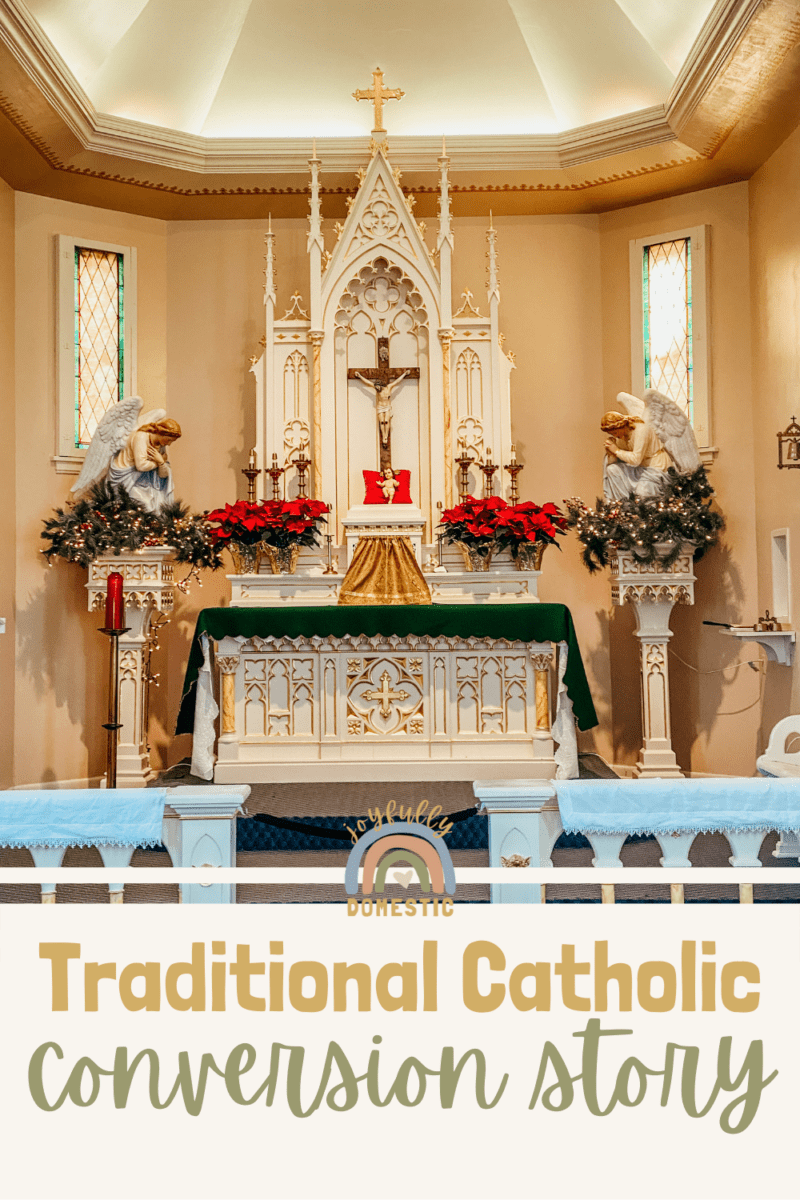 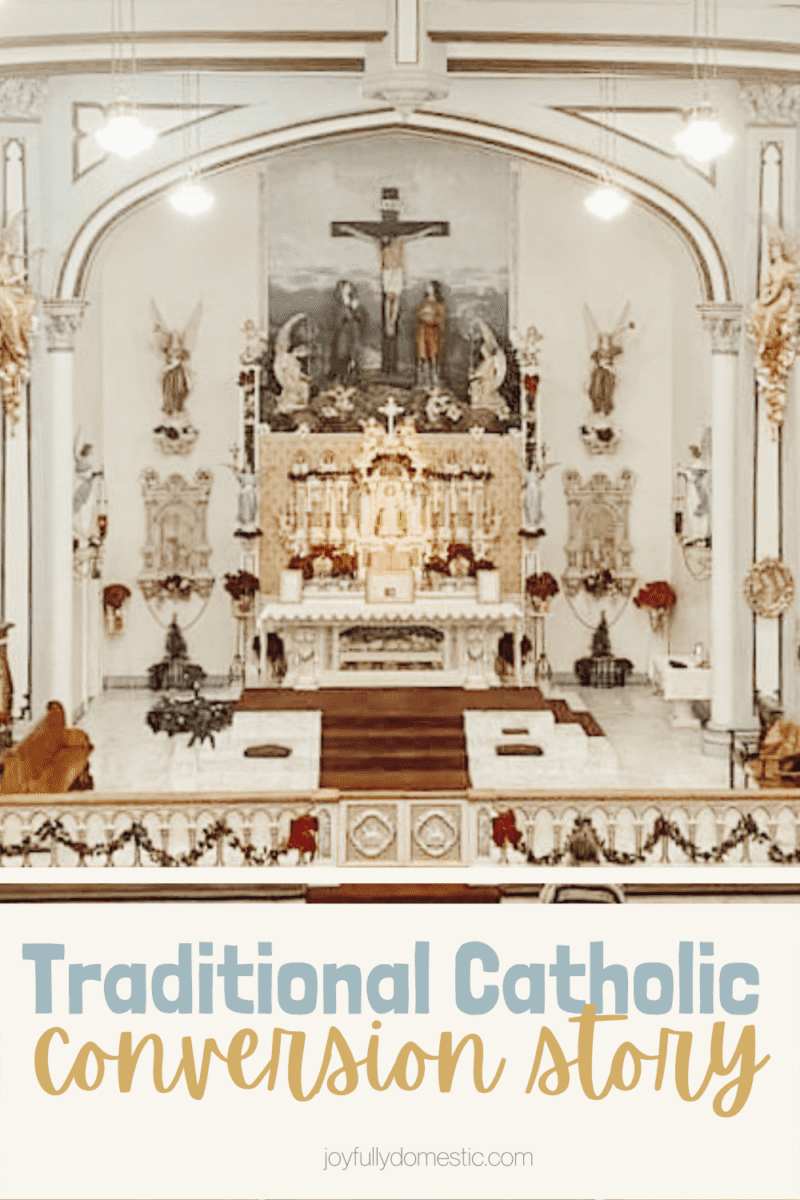 This is a difficult post for me to write, but I was encouraged to share with all of you. This is my Catholic conversion story to the true Traditional Catholic Faith – with a little bit of a reversion after some difficulty and with the help of the Blessed Mother.

I want to begin this story by defining what I mean by the Traditional Catholic faith. It is the Catholic faith that was handed down from Christ to the Apostles.

And was carried on by tradition through the ages until the 1960’s when Vatican II formed a new mass. I will cover this a little more in depth later in this post — on what this means, and sources of articles for further research if it is desired.

The beginnings of my catholic conversion story

It was the early 1990’s and I grew up in a family with two younger siblings. We were the typical family dynamic at that time and did not have any faith or knowledge of God.

So, you will really see the hands of God and Our Lady in bringing me to the truth.

Before I go too far into how this all started, I want to give a small backstory of my father’s past. He was baptized in the Catholic Church when he was born in the 1950’s, but was not raised with any faith.

And so in his early 20’s he met a gentleman who helped him learn about the Traditional Latin Mass. This led to a brief attempt at entering the seminary to become a priest in St Mary’s, Kansas. But then he met my mother and they decided to get married.

Unfortunately, this also led to a loss of faith for my father.

The search for truth begins

One day, as I was looking for a book to read in our family library, I found some of my father’s old Catholic books stashed in the back of a cabinet.

Probably put in the back of that cabinet through guilt. But hey, at least he didn’t throw them out!

But our faith will lead us to believe that this was all very Providential.

I carefully selected a few books and took them to my room. The first book I began to read was a First Holy Communion catechism and a Baltimore catechism . As I began to read these books, I was full of questions and some confusion.

So, I started to question my dad and ask him to tell me more about God. You can imagine that someone who had lost their faith would become irritated. And boy, how little he wanted to get involved in the topic. He was annoyed and brushed me off.

Finally, after much persistence, he allowed me to go to mass. Knowing that a neighbor lady was Catholic, my parents allowed me to attend a Saturday evening mass with her.

When we went, I immediately felt uncomfortable. The things I was experiencing at that mass was not at all what I was reading in these catechism books and I was incredibly confused.

Where was the reverence?

There was immodesty in the supposed house of God. I very specifically remember ladies in incredibly short-shorts and t-shirts. As a young child, this was uncomfortable for me.

And don’t get me started on the noise and strangers trying to shake my hand and give me hugs. I did not understand why at the time, but it didn’t feel at all like the Catholic faith that I was reading about.

This was a very confusing time for me. But I continued reading various books on the faith and asking my dad questions.

And I did something that I had never done in my entire life before, I prayed.

A jolt from Heaven

Shortly after my search for truth began, we were jolted awake one early morning in January of 1994. A 6.7 magnitude earthquake hit the San Fernando Valley in California at 4:30 am that morning. This quake is also known as the Northridge earthquake.

We had recently moved from the area of the epicenter to the Antelope Valley. But it was still incredibly strong where we lived. For those of you unfamiliar with this earthquake, there were 57 deaths and more than 8,700 injuries.

Of course this led to widespread destruction and power outages. My family knew that my father and younger brother would need to make a journey to the valley to check on the safety of our family, especially the elderly.

It looked like a war zone as they navigated the dangerous highways with fallen power lines and downed buildings.

Remember this is also before cell phones were a thing. But even if they were, they probably wouldn’t work with the amount of destruction.

After making their way down to check on all of our grandparents and other family, they returned home that evening.

This was the jolt that my father needed. He said, “alright, let’s get back to church”.

So, one Sunday, we piled into the family car and headed to mass in the valley. It was the similar experience that I received when attending that Saturday evening mass with my neighbor.

As soon as we got back to the car, my dad said, “this is not the true mass”. And so our search continued.

Then, one weekend not long after this experience, while reading the Sunday newspaper, my dad found an advertisement for a “Traditional Catholic Church”.

He responded with a, well let’s check it out, but let’s also not get our hopes up kind of attitude.

And so, the next weekend we again piled into the family car and made the journey down to the valley for what exactly… we were unsure at the time.

But, we were all pleasantly surprised. The mass was in Latin, it was reverent, and there was no laughing and joking inside of the church.

God led us to find the true church! And so, we stayed after Mass to talk with Father. Over the next few months, we were instructed in the faith, and received the Sacrament of Baptism. And in May I received my first Holy Communion!

But this is not the end of my Catholic conversion story, things went well in our faith for many, many years. And as I got older, I wanted to become a nun – a Carmelite to be specific. I loved the idea of living a life of solitude and contemplation. But I had a hard time with finding a Traditional Catholic Carmelite convent.

And then one random Sunday evening as we returned home from a parish picnic, I had a message on our answering machine from the Sister Superior of the Mater Dei convent in Omaha. She was inviting me to visit the sisters and test out my vocation.

Since this was completely unsolicited, I believed it to be God’s Will. I was only 14 at the time and was to attend high school while still living with the sisters. So I tried it, but I struggled with many things in the spiritual life and being around worldly companions in the school. And so, I returned home after 8 months.

Eventually my parents wanted to get our family out of California and find a better community to raise their children. And so they decided to move to Nebraska.

This was quite the journey as we had now grown to a family of 7, and my mother was also pregnant with her sixth child at the time of our move.

Within a couple of years of moving to Nebraska, my family began to go through many difficult crosses. Life in Nebraska was hard for all of us. But instead of turning to God and leaning on our faith, our family started to drift apart.

Family prayer and mass attendance started to dwindle. And this is the part that is crucial – without daily prayer, we became weak.

Unfortunately, the devil destroyed our family life and my parents divorced. It was a whirlwind for many years after this. Our faith was nonexistent and our entire family fell away from the church.

This was a struggle for many years, but Our Blessed Mother slowly started to bring some of us back to the faith.

Despite the lack of faith in our home, my younger siblings attended the Traditional Catholic school in Omaha.

I would attend Sunday Mass sporadically, but it took me over 10 years to totally return back to church.

When I was a child learning my faith, I began to pray three Hail Marys every night before bed, without fail. No matter how deep into an unholy lifestyle I fell, I kept this routine.

This is the one habit that I never gave up on. And so, I credit Our Lady completely for picking me up out of this horrible life that I was living. She brought me back to the Sacraments, and I am so thankful!

So fast forward a few years, my boyfriend at the time began to go to Sunday Mass with me. And how providential that there was a Traditional Catholic Church not far from where my future husband needed to move for work.

I’m incredibly grateful to Our Lady for also bringing my husband to the faith. And my father-in-law returned while he was suffering with cancer. He began to pray his rosary again, attended mass with us on Sundays — all while suffering terribly with his disease. And on his deathbed, he received Extreme Unction and the Apostolic blessing!

If you’ve made it this far through my Catholic conversion story, you know that we follow the Traditional Latin Mass – the faith as it’s always been before the time of Vatican II.

And though we may be the few, we are still very much alive and in many places worldwide.

It is no secret that we live in very difficult times. Right now, there is a decisive / divisive spiritual battle going on.

And so, I want to share a few links with anyone who may be interested in learning more about this theological position.

Contrary to what some misunderstand, a sedevacantist sees the Novus Ordo as a different religion that is not Catholic and rejects it. They are not heretical, they are not schismatic. And it is not a new “sect”.

We are Roman Catholics, we are just not Novus Ordo.

Here is some helpful information to further clarify this information: 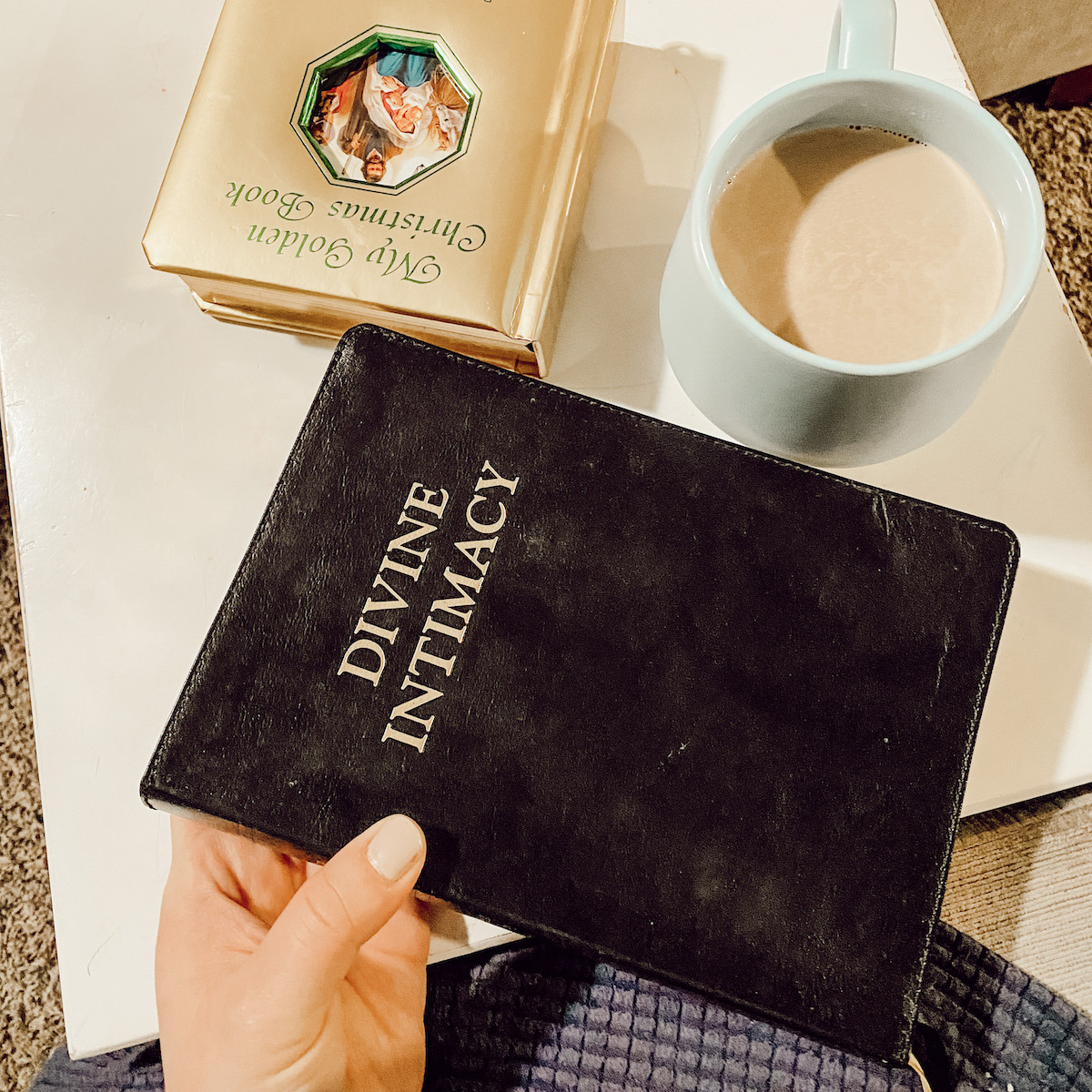 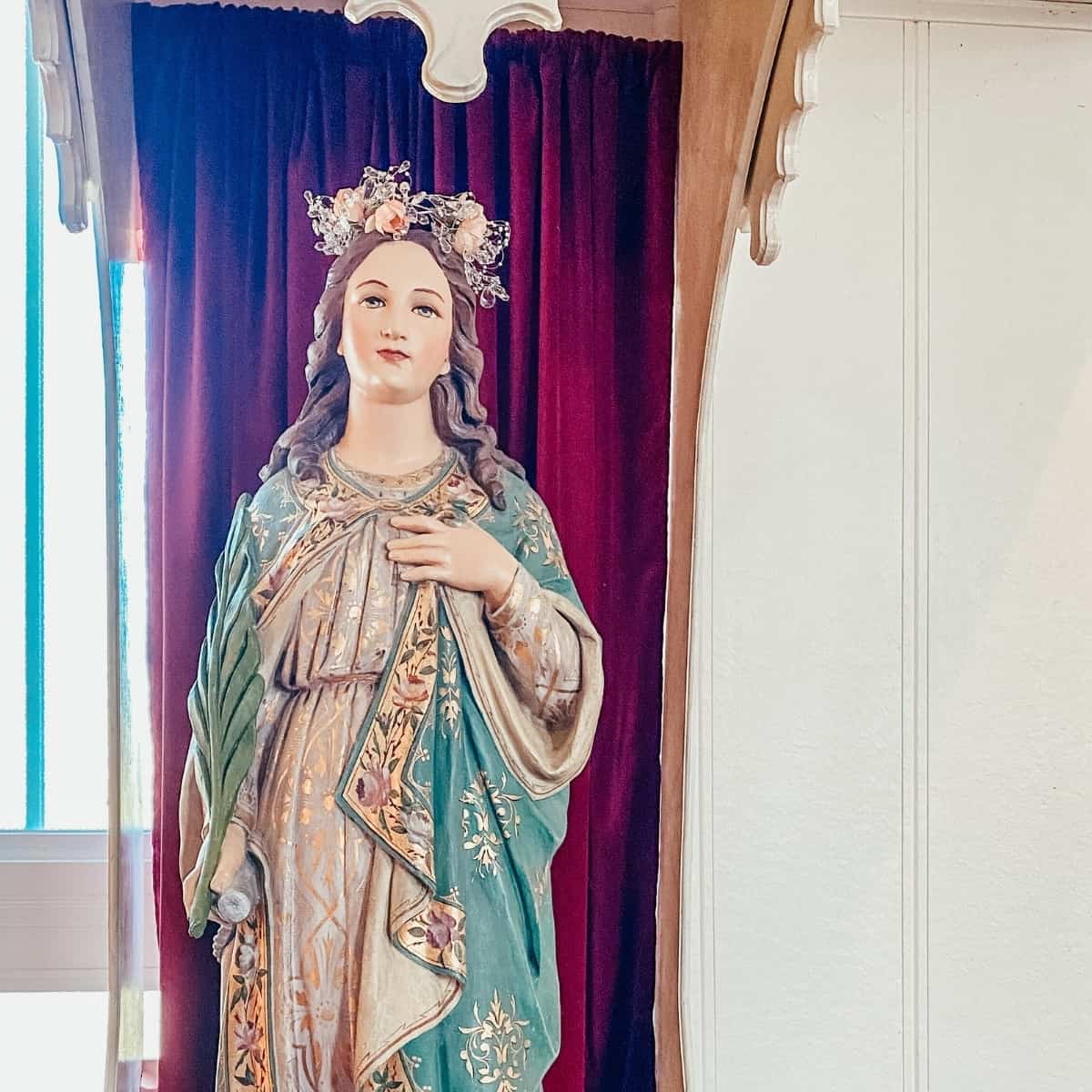 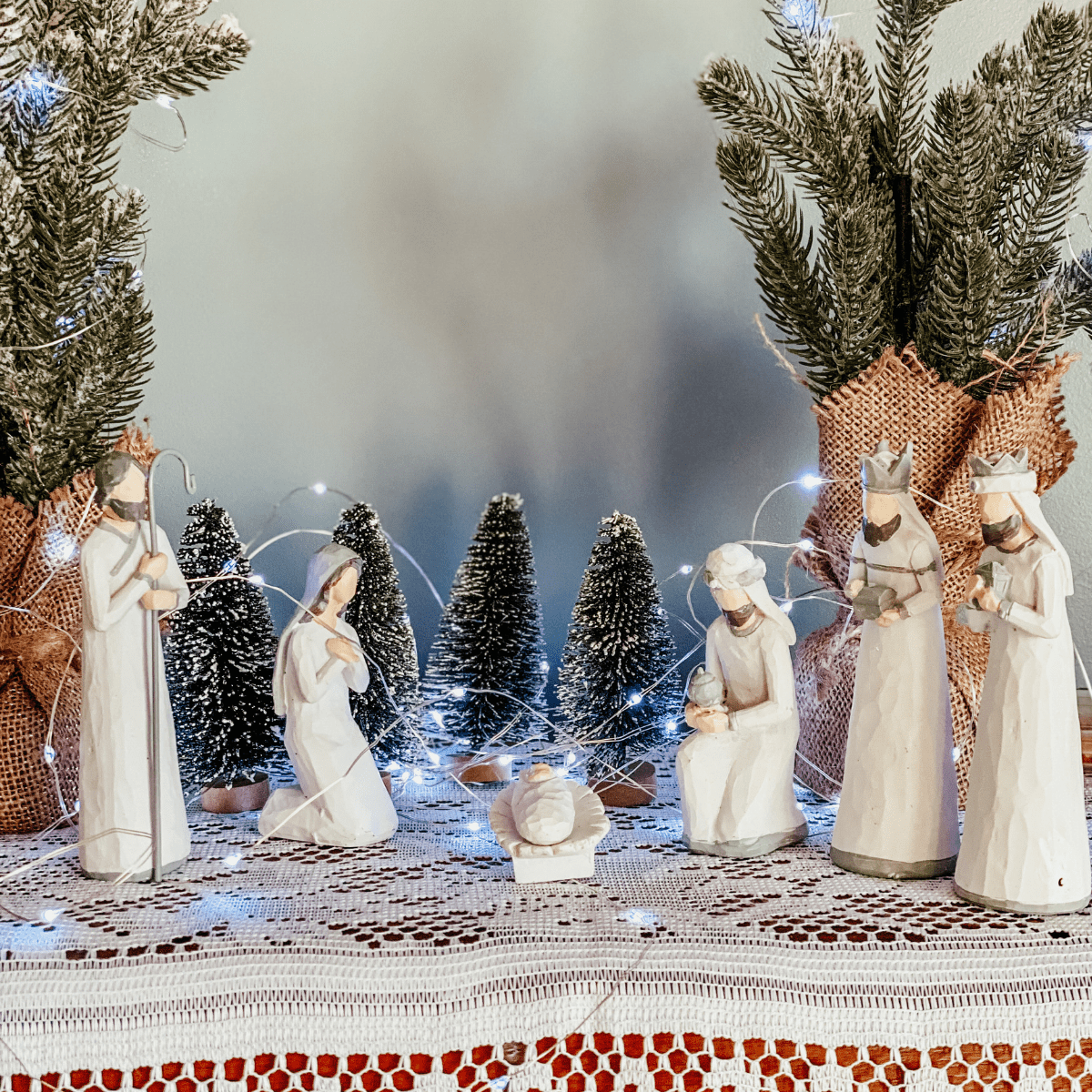 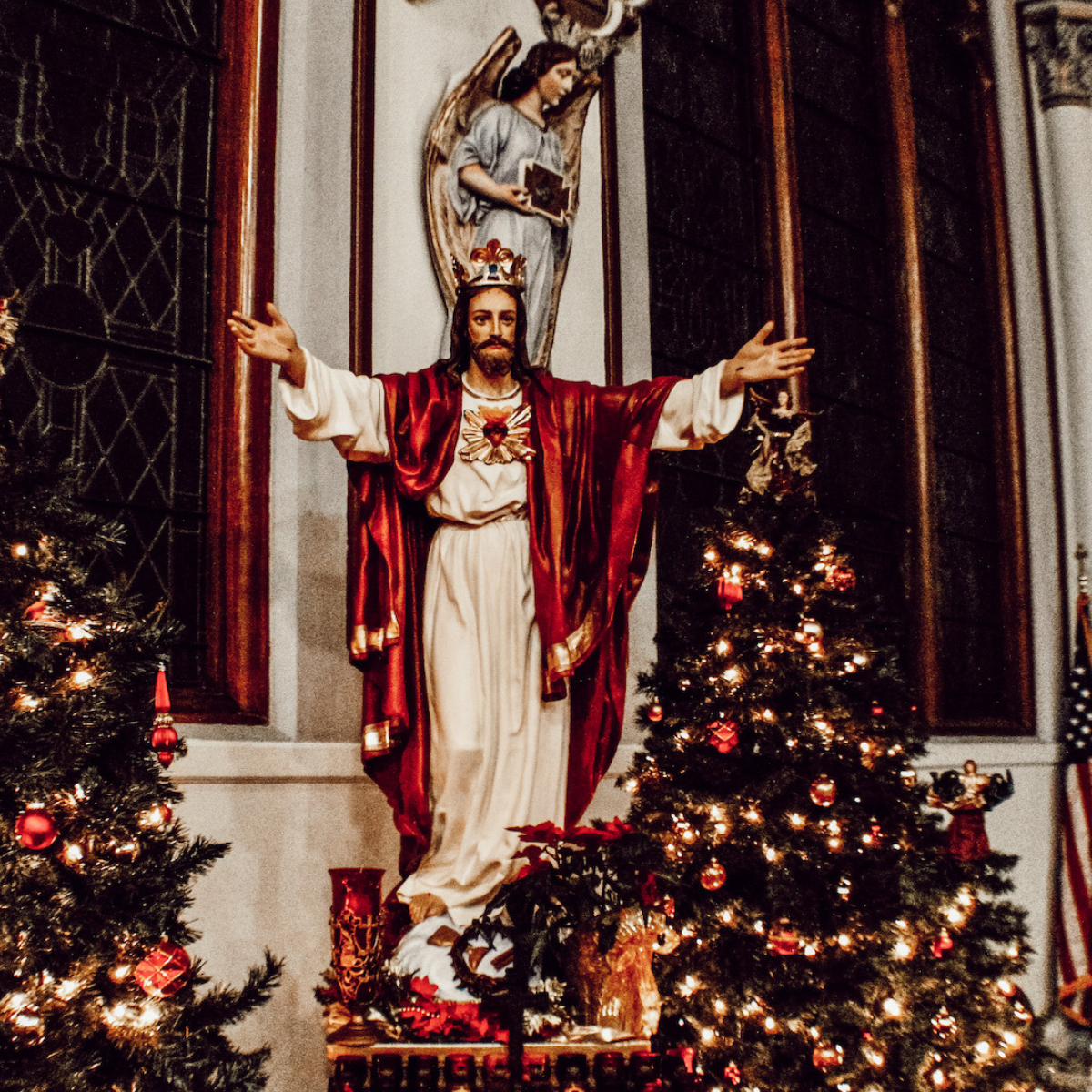 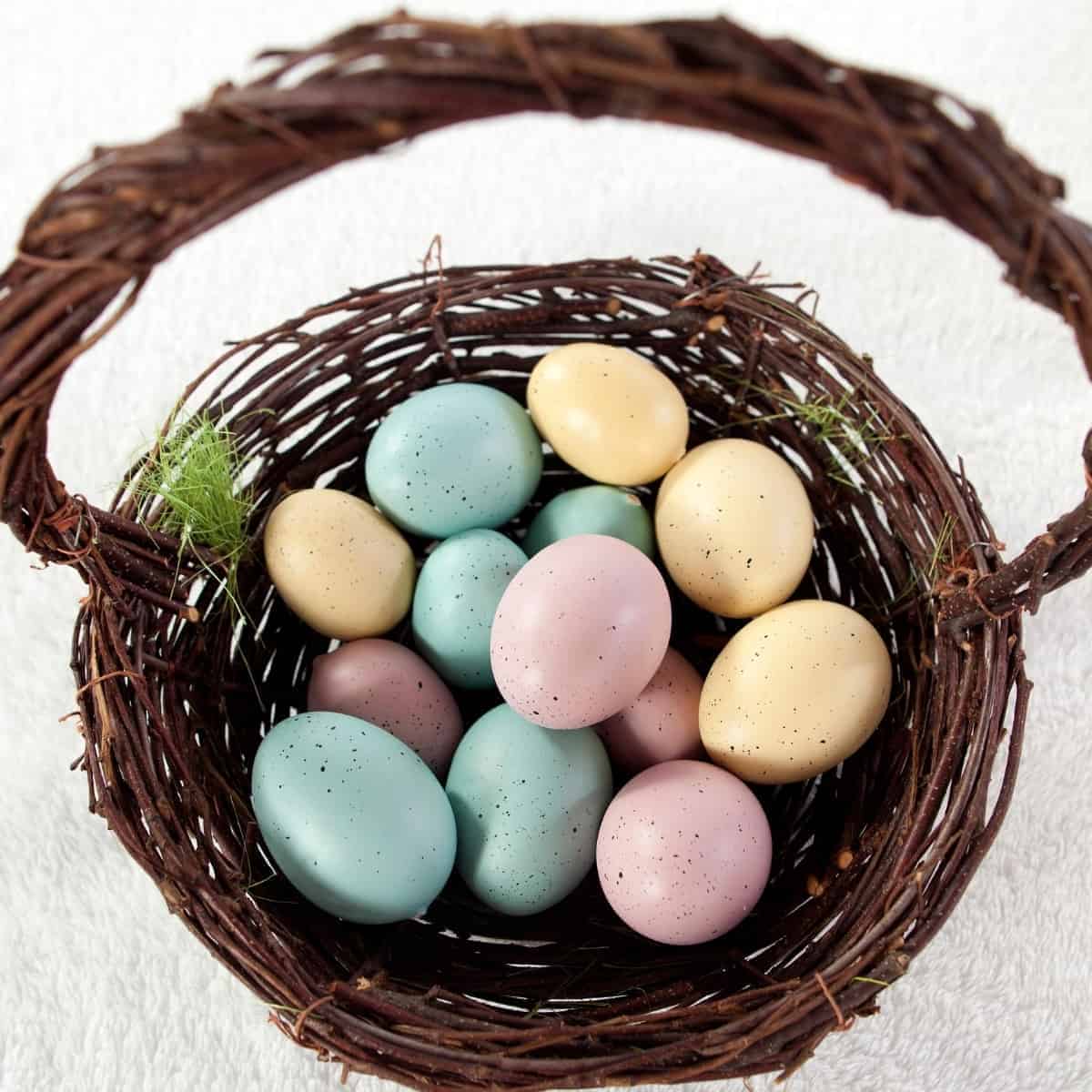 I’m a Traditional Catholic & California girl transplanted to the middle of nowhere Nebraska. It all started when I fell in love with my real life cowboy. And here we are raising our 4 little ones to appreciate simple living.